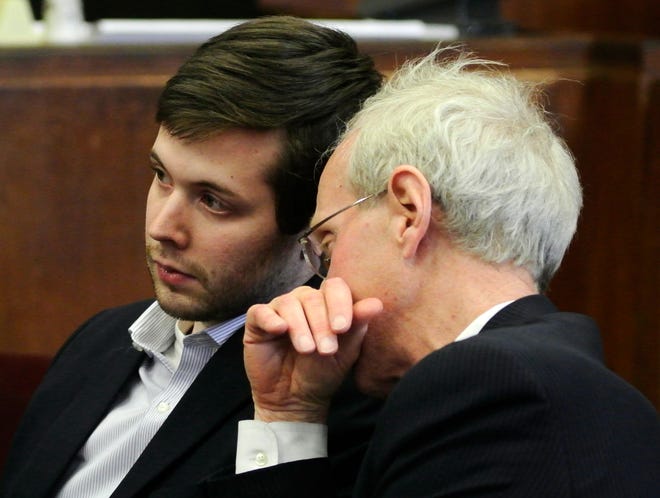 HARWICH – On Jan. 1, 2013, Anthony “Tony” Spaulding’s life was cut short when he was stabbed to death by Brian MacDonald during a fight in Allston in the early hours of the New Year.

Spaulding was 21 and a music student who had graduated from Harwich High School. He was in his final semester at New England Institute of Art.

In 2015, MacDonald, who was 26 at the time, was convicted of voluntary manslaughter and received a seven- to 10-year sentence. After nearly six years in jail, MacDonald, now 32, will be released Friday from MCI Concord, five months ahead of a July parole date.

The 2013 murder involved multiple deep stab wounds leading to Spaulding’s death, and his family is angry about the early release given what they say is a lack of remorse shown by MacDonald. Evidence of his lack of contrition, they say, are the multiple appeals of the trial and parole board decisions.

“He never wrote me a letter saying he was sorry,” Spaulding’s sister, Caitlin Van Gelder, who lives in Yarmouth Port, said Thursday. “The only way he can prove to me he’s sorry is to stay in prison and serve his full sentence.”

Spaulding’s family testified by videoconference at two parole board hearings: one in April at which MacDonald was denied; and an appeal in September at which he was granted parole in nine months.

“He had a flat affect, no emotion,” Van Gelder said about MacDonald reading his plea to the board. “How can you show no emotion when you stabbed (Spaulding) and then walked home?”

MacDonald will be released to live in a home in Billerica, according to information Van Gelder received from a victim/witness advocate. MacDonald’s parents live in Billerica, and his girlfriend Bianca Hollenbeck and their child live with them, according to online sources. Hollenbeck pleaded no contest to an assault and battery charge for her role in restraining Spaulding during the fight.

Van Gelder said the family was especially upset when they heard from the advocate that, after that successful parole appeal, MacDonald had asked for an early release out of fear he might contract COVID-19 before his July parole date. She said her grandfather had recently died from COVID-19.

“I know how serious COVID is and (MacDonald) is using it as an excuse,” Van Gelder said.

The state Department of Correction did not return a voicemail and an email seeking comment. But Elizabeth Matos, executive director of Massachusetts Prisoners Legal Services, said Thursday that the state has not been releasing prisoners because of COVID-19 outbreaks unless they are critically ill.